People need to just stop FREAKING OUT over that crazy notion that Millennials are killing wine. Take a deep breath (the downward facing dog pose might help) and think about this for a moment. Millennials are just like every generation before them. The only difference is they are one rung up on the evolutionary ladder. And, oh my god, that is scaring the crap out of people.

The headlines are daunting, I know:

“Millennials Are Changing the Way We Drink Wine”

“Millennials, Social Media and the Death of Wine Wisdom”

It’s all just a little bit too much. I’m starting to feel bad for the Gen-Xers, those crazy kids who never got the attention they deserved as they Chardonnay’d their way through an ocean of whatever as long as it had a critter on the label: Yellow Tail, Little Roo, The Little Penguin, Monkey Bay, Goats Do Roam, etc. I am generalizing here, of course, but Gen-Xers were a marketer’s dream, an impressionist generation that pretty much killed Merlot when a fictional character named Miles eviscerated that grape in the movie Sideways. Merlot is still trying to recover.

But, hey, who I am to criticize? My generation, so bland they called us Baby Boomers II (like, we couldn’t even have our own cool name), learned from our parents. They consumed an ocean of dry vodka martinis (the most daring added a couple of pimento-stuffed olives), rye and ginger ale, and three kinds of beer in stubby bottles. Wine, which was sold in limited choices at government stores where you had to fill out a chit to get it, was for special occasions and your chance of seeing a bottle of Baby Duck at any memorable moment was about 99.5 per cent.

It’s no wonder that the BB2s thought they had died and gone to heaven when the greatest invasion in the history of wine hit our shores with boatloads of heavily oaked Chardonnays and Shirazes from Australia.

That was it. Let the good times roll. Our generation, weaned on an uninspired diet of Hungarian Szekszardi (affectionately called “sex on Saturday”), Chianti from bottles wrapped in straw, sickly-sweet Blue Nun and Mateus, was suddenly lapping up these big Aussie wines at a scary rate while the land Down Under scrambled to pop more vines in the ground and order copious amounts of oak chips and barrels to feed the astonishingly thirsty and lucrative market.

I can remember serving Lindemans Bin 65 Chardonnay (still going strong today at about $10 a bottle) at my wedding when it was an unknown. It was so smothered in oak that you needed a bucket of water on standby to avoid dehydration. Our generation couldn’t get enough of it; anything with a Bin number on it was pure gold to us. That trend would migrate to the rest of the wine world once Australia started stealing (and dominating) shelf space. California, Chile, Argentina and even Canada, continued the BIG WINE revolution with over-oaked, over-saturated and over-cooked red and white wines.

Until we didn’t; and then the whole thing came crashing down. Such are trends.

These are numbers too good to ignore for wine marketers. And best of all? Millennials are drinking wine younger and sticking with it as they age.

But it’s what they’re drinking that has everyone’s knickers in a knot.

A touchstone article, written by Lettie Teague for the Wall Street Journal, under the headline “How Millennials Are Changing Wine,” began with this inflammatory quote from a New York City sommelier at the Batard Restaurant:

“So many Millennials are interested more in the narrative of the wine rather than the wine,” said Jason Jacobeit. “A lot of mediocre wine is being sold on the basis of a story.”

And that’s precisely why so many wine companies target Millennials with social media campaigns, where most of this generation gathers its wine intel, to create back stories and eye-catching packaging for newfangled wines that are mass produced and sold at a price point that makes sense: the sub-$20 range — think Gallo’s Barefoot (under $10), Ménage à Trois (Trinchero), or Apothic. Or, in a marketing scheme gone wild, TXT Cellars’ OMG!!! Chardonnay, WTF!!! Pinot Noir and LMAO!!! Pinot Gris.

It is true, Millennials are a lot smarter — don’t blame them for OMG!!! Chardonnay — than previous generations. They have everything they need to know about wine, are just a Siri command away if they don’t, and use myriad social media platforms to validate their choices.

And they are far more adventurous than previous generations and aren’t afraid to purchase unfamiliar brands, according to the Wine Market Council. Oh, and this hurts: they don’t rely on sommeliers or traditional wine critics for their choices.

Take this tweet from @gkruth (Geoff Kruth), sent out last December that sent everything all atwitter:

“I think I just discovered the future of wine criticism. All tasting notes should be comprised of only Emojis. #nomorepoints CA Chardonnay (insert pear, apple, toast, custard and evergreen tree emojis here)”

It was brilliant, and speaks to the generation of new wine drinkers. Points given to a wine by Old School wine writers are meaningless to these up-and-comers. They are making their own set of rules, and are changing wine consumption. But, again, they are NOT killing wine. They are reshaping it, and if you’re are a winery thinking about your future, you better take notice. 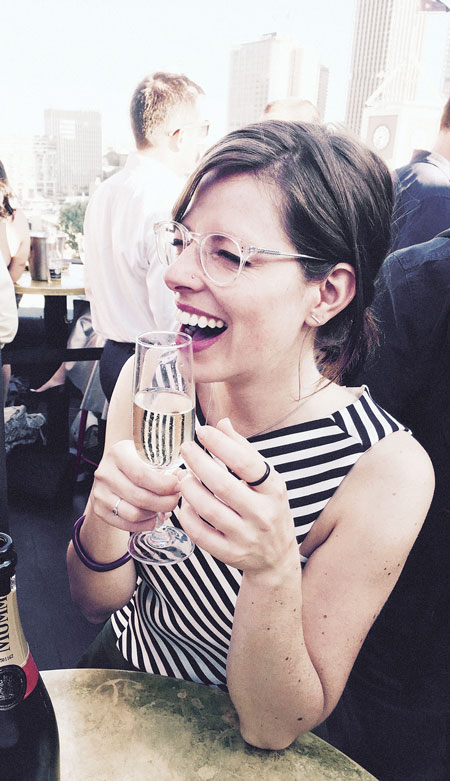 “I also don’t mind paying more for local stuff, much to the chagrin of anyone who thinks that cheap imports from France or Italy are ‘so much better than anything we’re producing in Canada.’ Don’t get me wrong, I love French and Italian wines — I love all wines — but that argument is a) bullshit, b) outdated and c) boring.”
Robyn Thiessen

Angela Aiello, who founded Toronto’s iYellow Wine Club 10 years ago (and also writes wine columns for Style At Home and Chloe magazines), has been a guiding light with her socially interactive, unpretentious and unique approach to the vinous world. As an “older Millennial,” born in 1982, Aiello filled a void in Canada’s largest city and opened the most active wine club in the city (now with over 20,000 members) targeted at the first Millennials to reach drinking age. There is an element of learning about wine, but also a social aspect that brings Millennials (and anyone else) together through wine events, after parties and day trips to Ontario wine country. She brings up to 50 of her club members to Niagara 10 times a year and she’s been doing that for a decade.

Aiello is smart, a savvy businesswoman who just happens to be drop-dead gorgeous, which lands her on magazine covers and TV, talking about what she knows best — wine. People want to learn from her. Her observations and wine recommendations, both through the club and as a wine “ambassador” for various products, are influential. She knows her stuff.

“Narrative is important,” she says. “If your wine doesn’t have a story, you’re in trouble. There has to be an emotional connection.”

She calls Millennials “ahead of the curve” compared to past generations. They enjoy wine at a much younger age and have an insatiable thirst for learning and exploring.

Most important to this generation, says Aiello, is they want to want to know where their wine comes from; they want the story behind the bottle before they buy in.

Aiello’s wine recommendations run the gamut — from the traditional Taittinger Champagne to the newfangled Joiy Sparkling, which she described this way in a review over the Christmas holidays:

“This four mini bottle pack of bubbly […] is fun and delicious. Sip with a straw or a wedge of citrus. This is the great holiday party accessory to bring and/or serve. Their tag line for the wine is ‘bottled happiness’ and it sure is! This modern version of sparkling is from New Zealand and has really great packaging too. This is a very cool gift option for your bestie who will ultimately share it with you! #joiyWine”

For Suresh Doss, a food/drink writer based out of Toronto and publisher of the popular wine/food/lifestyle website spotlighttoronto.com, social media is crucial for Millennials, much more so than his Gen-X generation.

“I look at social media and see what people are drinking. I would say the drinks that come across my feed are usually from the following type of people: makers of the product, media, foodies. I see what they’re drinking, and if it’s something I haven’t seen before, I’ll try to seek it out. At this point, I’m not necessarily looking for a story, or a gimmick, as I trust the person that drank it and shared it.”

What he doesn’t buy are the “overly marketed products that try to tap into the foodie/wine-o demographic by using catchphrases and keywords like artisanal and small batch.”

If there is a future for Millennials to aspire to once they tire of the backstory and the Next Great Wine to chase, it might lie in the palate and wisdom of 30-year-old Robyn Thiessen, the daughter of a Niagara grape grower who was driving a tractor on the family farm when she was just eight years old and knows all about trends and the ebb of flow of wine from Gen-Xers to Millennials.

“Backstories are cool, sure, and labels matter,” says Thiessen, a law student in Australia, a year away from her degree. “But for me I think it’s much more about finding wineries or winemakers, small operations, that know what they’re doing and put passion and care into their craft rather than follow the trends.

“If that fits into the hipster/Millennial desire for a cool backstory, then fine. But I think about the wineries I love in Niagara, and almost invariably they’re smaller, they do a few things really well rather than lots of things mediocre, they do some single-vineyard wines and they have really incredible people at the helm.”

Authenticity matters to Thiessen, whether it’s with an Ontario wine or any other region in the world. “I would never buy a wine from Niagara that wasn’t made with 100 per cent Niagara fruit. Full stop,” she says. “And that pretty much goes for any other region as well. I also don’t mind paying more for local stuff, much to the chagrin of anyone who thinks that cheap imports from France or Italy are ‘so much better than anything we’re producing in Canada.’ Don’t get me wrong, I love French and Italian wines — I love all wines — but that argument is a) bullshit, b) outdated, and c) boring.”

For Thiessen, the Gen-Xers and the Millennials, there’s more to wine than a kitschy label and a funky backstory. And, #OMG, isn’t that the way it’s always been?

One response to “Are Millennials Killing Wine? An exposé.”