It’s hard to pinpoint, but somewhere along the line, a funny thing happened that changed the entire collective soul of wine country in British Columbia. It was as if an open casting call went out for all the supporting roles needed to connect the dots between the 145 146 147 licensed wineries that now vie for attention in the Okanagan and Similkameen valleys.

And, boy, did people show up. They came in droves: chefs, brewers, mixologists, distillers, farmers, cider masters, fruit winemakers, organic produce growers, bakers, cheese makers and doers — the creative ones, the visionaries — who are pushing the boundaries of what it takes to fashion something wonderful, something delicious, something invigorating and something all-inclusive from a land staked end to end with grape vines.

Oh, there is plenty of wine in both valleys. World-class vino in every style imaginable, but now there is so much more. It is intrinsically woven into the fabric that has become an important destination for well-rounded taste tourists craving more than fermented grape juice.

In Kelowna, in what Catherine Frechette calls the “epicentre” for the current revolution, it is apparent that there is buy-in from the largest cities and towns in the Okanagan Valley and at long last a rural/urban symbiosis that had been sorely lacking in the past.

“What I’ve heard over and over from chefs who have made the move (to Kelowna) is that they are drawn by the rich farming community, and the fact that they can feature items on their menu that were picked that morning, from just a few minutes’ drive away,” says Frechette — the communications manger of Tourism Kelowna.

“There’s local, and then there’s über-local. That’s what Kelowna can offer.” 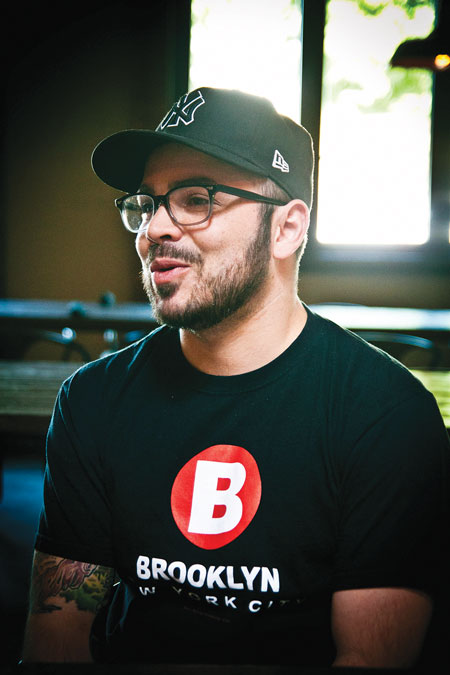 Sitting at the comfy-cosy Curious Café in the heart of Kelowna offers a glimpse of the good things transpiring in the Okanagan: a menu that combines the bounty of local produce and pairs it with Okanagan wine, local craft beer and hard apple ciders.

“Yes, the thread seems to be the use of local bounty, supplemented with West Coast seafood that is flown in daily,” Frechette points out. “There seems to be a trend toward purity of flavour of really high-quality ingredients, as opposed to a lots of ingredient manipulation (like molecular gastronomy). Think wine country simplicity.”

The robust restaurant scene exploding in city centres, and even in the smaller towns, is providing healthy competition for wineries in the area and offering a wide-range of choice for consumers. There are now over 43 restaurants at BC wineries; that’s more than 20 per cent of wineries offering a myriad of cuisine to go with their experience.

Says Sandra Oldfield, CEO of Tinhorn Creek on the Golden Mile: “That’s huge and very unique in the world of wine touring.”

Tinhorn saw the need for a winery restaurant and took on a partner to build the spectacular Miradoro Restaurant with sweeping views of the scenic South Okanagan. A Mediterranean-influenced menu showcases the best local ingredients the region has to offer prepared by chef Jeff Van Geest.

Wine has slowly started sharing the spotlight in both the Okanagan and Similkameen valleys. It had to happen, to attract a greater audience, to keep them in the hotels and resorts for longer periods of time. There had to be more than just wine to further evolve.

Craft beer has exploded in North America and the Okanagan has been no exception.

At Kelowna’s Tree Brewing Beer Institute, a small-batch craft brewery, they see themselves as another piece of the mosaic, part of symbiotic relationship that is flourishing.

Operating in the town’s centre, with another local location in the works, Tree Brewing attracts a steady stream of customers who belly up to the tasting bar that offers a new cask concoction every Thursday from the Citrus Wheat Ale, to Honey Black Lager and Monkey Pod Rye Ale.

“We’ve added a lot of life to the city,” says Gokiert.

Similarly, in the other main city of the Okanagan, Penticton, the Cannery Brewery opened an expanded facility in the spring to keep up with demand for its established portfolio of individually crafted fine ales and lagers.

Business is brisk and owner Patt Dyck has bet on a bright future with the increased capacity of the new brewery. The signature Naramata Nut Brown Ale is a tasty, full-bodied, nutty and balanced beer with no bitter aftertaste.

Up on the Naramata Bench, where seemingly every inch of land is planted to grape vines, a young German family from Stuttgart has carved out a different kind of niche.

Maple Leaf Spirits started the oldest craft distillery in the Okanagan in 2005 and moved to the bench in 2013. Jorg and Anette Engel use only fruit and grape-based produce as the base for their spirits, all sourced from the South Okanagan.

Distilling a wide range of products, from maple, cherry, quince, and pear liqueurs to Skinny Pinot Noir, Gewürztraminer grappa (a delicious distillate made from the skins and pits of grapes remaining after the wineries have extracted the juice), unique fruit brandies and European-style eau-de-vies. It’s a natural fit along the Naramata Bench trail.

Looking out over the bench on a gorgeous spring day, Anette Engel says, “Every day we wake up and see this view. That’s why we are always smiling.”

Emerging from an adventurous 20-minute drive through the hilly and twisting roads of the western Okanagan Valley, we pause at the intersection of Awesome and Stunning: the gateway to the Similkameen Valley.

It is raw beauty to the right as we look down the vast and seemingly infinite valley where the meandering Similkameen River shimmers in the bright sunlight below us, and, to the left, breath-taking mountains tower above pastoral farmland, vineyards, fruit trees, grazing cattle and untethered horses. It is a peaceful, awe-inspiring scene of natural and rugged eye-candy. 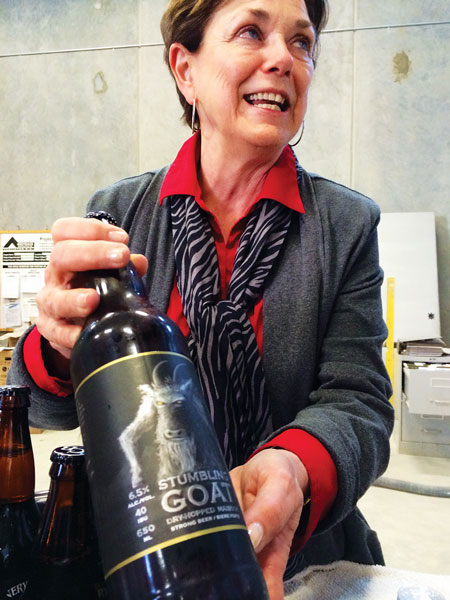 It’s no wonder enRoute Magazine called the Similkameen Valley “one of the world’s five best wine regions you’ve never heard of.” It has existed for years in the shadow of its more famous sister valley, the Okanagan, with all its warm lakes, picture-perfect vineyards and wineries, idyllic resorts and large urban centres.

But who knew all this was right next door?

Set amongst the dramatic backdrop of craggy mountains, it is not surprising that wine lovers and thrill seekers alike are starting to take notice.

The Similkameen Valley has been growing fruit and grapes for decades, but it is only recently that a rush of wineries has emerged. In the past, grapes were sold off to wineries in the Okanagan. But when awards started piling up for wines made with Similkameen fruit, winemakers decided it was time to control their destiny and make their own wine.

There are currently over 600 acres of vineyards in the Similkameen and a growing list of wineries.

Similkameen is also considered to be the “organic capital of Canada” with an estimated 42 per cent of all crops grown organically. This is due to the ideal conditions of dry heat, long hours of sunlight and the blustery wind that whips through the valley keeping pests and diseases at bay.

The first stop on our recent tour takes us to the Forbidden Fruit Winery located at Ven’Amour Organic Farms, a certified organic tree fruit farm, vineyard and nature estate located inconspicuously along the banks of the pristine Similkameen River in Cawston.

The winery produces an array of premium tree fruit wines and grape wines from estate fruit grown on the property’s 147 acres. Owner Steve Venables has created an organic oasis of goodness out of the rugged wildlife habitat that surrounds his property.

He grows myriad fruit including cherries, apples, pears, apricots, plums, peaches and grapes and has been organically certified since 1985, long before it became stylish to do so.

“When we first opened it was hard to get traction,” Venables says, because many consumers considered organic fruit an inferior product. But with people now more concerned about their health and a fear of pesticides, the pendulum has swung back in favour of organics.

“We feel we live in a garden paradise,” says Venables.

His wines are particularly unique and delicious, — from the Pearsuasion pear wine with its spicy fruit on the palate, to the Cherysh Cherry Rose, all ripe cherries and rhubarb, to the fabulous Caught Apricot Mistelle, which Venables calls the “nectar of the Goddesses” — Forbidden Fruit is a must stop while trekking about this valley.

Further down the road we are treated to an organic feast at the Rustic Roots Winery and Harker’s Organics where eating is described as “farm to table TODAY.” In other words, if it wasn’t picked fresh that day, they don’t serve it.

The Harkers are a sixth-generation farming family with 30 acres of land where they grow 12 acres of ground crops including heirloom tomatoes, peppers, herbs, etc., and 18 acres of tree fruits. The family also runs a brokerage for 15 other organic farms in the Similkameen where the collection of produce is sold to a variety of local, high-end restaurants, retail and wholesale outlets as well as their own farm market and Rustic Roots Winery.

“All our eggs aren’t in one basket,” Sara Harker tells us. “It’s important to be diverse so we can be sustainable.”

All the wines at Rustic Roots are fruit-based, no grapes are used at all, but what makes the winery unique is that all the fruit wines are made like grape wines, mostly dry, fresh with complex flavours and textures, as opposed to the fruity and sweet styles of other fruit wines.

“We wanted to change people’s minds about what fruit wine is,” says Harker.

The Rustic Roots Fameuse 2013 uses apples from a single, 100-year-old Fameuse tree on the property and blends in estate plums for a riot of flavours that leave you refreshed and satisfied.

Our last stop of the day took us to Clos du Soleil, a serious grape winery located just outside the town of Keremeos.

Clos de Soleil, a French term meaning an enclosed vineyard of the sun, refers to the typical rocks, soil and sun that define the “special piece of land where we grow our grapes,” says winemaker and owner Michael Clark.

The winery’s name points to the long days of sun which pour in on the Similkameen Bench, one of BC’s most unique and promising microclimates.

“It’s exciting to be a part of an emerging region,” says Clark as we sip his wines.

It’s a terroir that lends itself to Bordeaux-style reds and whites with a distinct, region-specific component of minerals, layered herbality and expressiveness.

The wines are outstanding — from the Capella, a Sauvignon Blanc/Semillon blend, with creamy apple and pear notes, to the Signature, a dead ringer for Bordeaux red, with complexity, balance and ripe flavours — and a testament to what the region has to offer now and for many years to come.